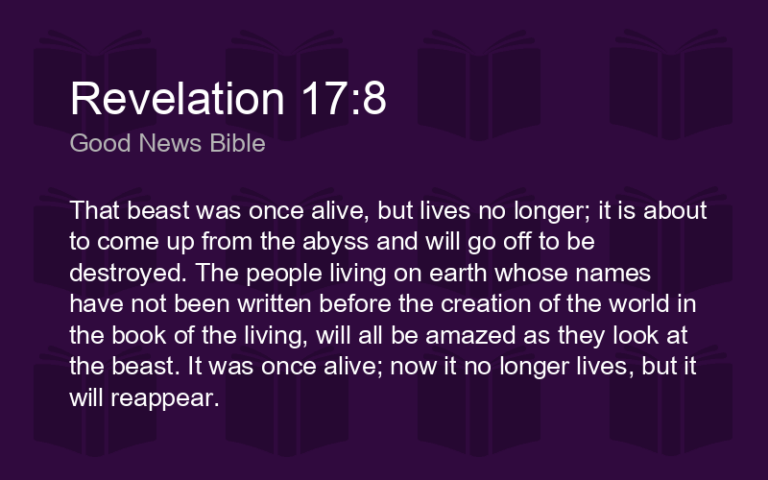 Revelation 17:8: “The beast that thou sawest was, and is not; and shall ascend out of the bottomless pit, and go into perdition: and they that dwell on the earth shall wonder, whose names were not written in the book of life from the foundation of the world, when they behold the beast that was, and is not, and yet is.”

At first the phrase “is not, and yet is” appears to be a contradiction. However, such a paradoxical description is the most fitting for the Beast. The consensus is that the Beast is Babylon in some sort of aspect or form, or by extension (i.e. a king of Babylon) (for the sake of argument, we will not get into the difference between religious and political Babylon, nor try to identify exactly what Babylon is). Babylon can be said to be “the beast that was, and is not, and yet is.” Babylon is an ancient city that was conspicuous during its prosperity (“was”), then declined to near obscurity by John’s day (“is not”), yet remained influential as a spiritual and/or political system throughout history (“yet is”). Babylon has never truly gone away. It will continue to exist deceptively until the time of the end. 1 Thessalonians 2:6-8 describes the “man of sin” as someone who somehow exists in the present (“yet is”) but has not been revealed yet (“is not”). Perhaps that is the meaning of “is not, and yet is”.