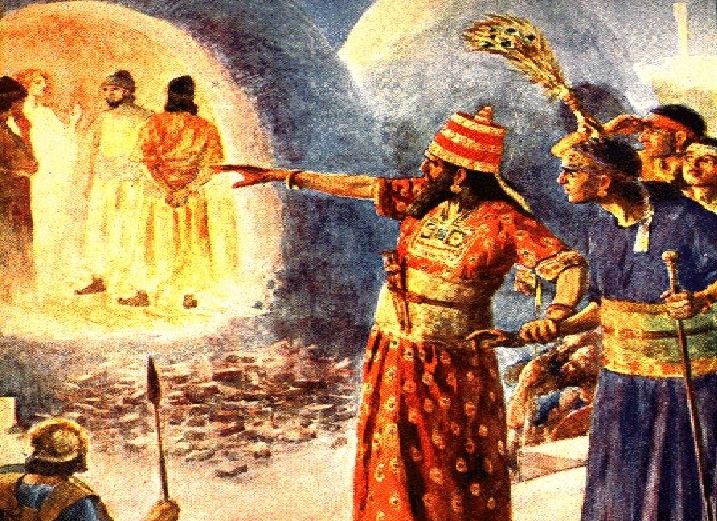 “He answered and said, Lo, I see four men loose, walking in the midst of the fire, and they have no hurt; and the form of the fourth is like the Son of God.” (Daniel 3:25, KJV)

This passage concerns the miraculous deliverance of Shadrach, Meshach, and Abed-nego from the fiery furnace. Clarke’s Commentary on the Bible says with respect to the KJV translation of this verse, “Is like the Son of God – A most improper translation. What notion could this idolatrous king have of the Lord Jesus Christ?” Barnes’ Notes on the Bible says, “The Chaldee is simply, לבר־אלחין דמה dâmēh lebar ‘ĕlâhı̂yn – “like to A son of God,” or to a son of the gods – since the word אלחין ‘ĕlâhı̂yn (Chaldee), or אלהים ‘ĕlohı̂ym (Hebrew), though often, and indeed usually applied to the true God, is in the plural number, and in the mouth of a pagan would properly be used to denote the gods that he worshipped.”

While it is recognized that the Aramaic word could mean either “gods” or “God” (context determines whether it is singular or plural in English), several commentaries share this view that the “polytheistic” king of Babylon would have conceived of the figure as a son of the “gods”, plural, and not as “God”, singular. Such commentators fail to read the immediate context. In just the next verse (verse 26), Nebuchadnezzar addresses the three Hebrews as “ye servants of the most high God”. In verse 28 the king continues to praise “the God of Shadrach, Meshach, and Abed-nego”and refers to “his angel”. In verse 29 the king recognizes the uniqueness of this God who alone “can deliver after this sort”. So while it may be true that the king was a practicing polytheist, he was certainly knowledgeable of the singular most high God, which we translate as “God”.

Another point of contention is that the KJV translated “בר” as “Son” with a capital letter, which makes it seem as though the king was referring to the second person of the Trinity. The critics point to verse 28 where the king recognizes this being as an “angel” to rebut the presumption that a greater divine being was in the mind of the king. In response, although the king believed that this being was in fact an angel, his statement in verse 25 is a simile. He says, “the form of the fourth is like the Son of God”. Here he is not saying that the being is in fact the Son of God but merely looks like the Son of God. He certainly could have said the being looks like an angel, but he chose to provide the loftier expression. Accordingly, we can understand that the king was comparing the being to something resembling the most high God (which he acknowledges immediately later) and more magnificent than just an ordinary angel. The king may not have conceived of the actual Jewish Messiah in using the term “Son of God”, but at the least he was invoking the image of an avatar or a theophany in accordance with his pagan view. Thus to the king, this being resembled the “Son of God” as he understood the term. There is nothing wrong with capitalizing the S because it does not necessarily mean the king was referring to the second person of the Christian Trinity.